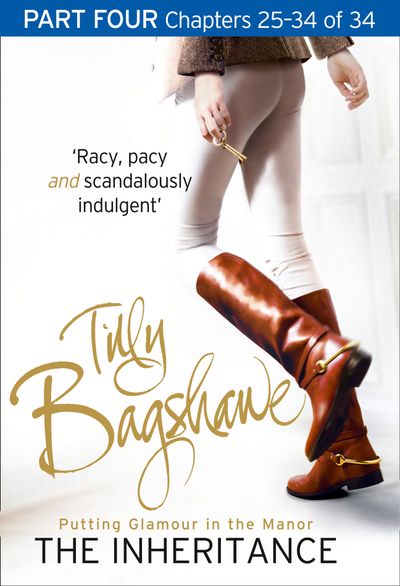 Tilly Bagshawe’s first Swell Valley novel, The Inheritance, has been serialized into 4 parts – this is the final PART 4 OF 4 (Chapters 25 to 34 of 34).

*The first three parts of The Inheritance are being released weekly from 29th May 2014, before the full novel is published. The final part will be released on 19th June 2014, when the full novel will also be available to buy in ebook and paperback*

Author: Tilly Bagshawe
Format: ebook
Release Date: 19 Jun 2014
Pages: None
ISBN: 978-0-00-759600-3
Tilly Bagshawe is the international bestselling author of nine previous novels.A single mother at seventeen, Tilly won a place at Cambridge University and took her baby daughter with her. Now married to an American and a mother of four, Tilly and her family divide their time between the bright lights of Los Angeles and the peace and tranquility of a sleepy Cotswold villageBefore her first book, Adored, became an international smash hit, Tilly had a successful career in the City. Later, as a journalist, she contributed regularly to the Sunday Times, Daily Mail and Evening Standard before turning her hand to novels, following in the footsteps of her sister Louise. These days, whenever she\'s not writing or on a plane, Tilly\'s life mostly revolves around the school run, boy scouts and Peppa Pig.

”'a cross between Jilly Cooper and Jackie Collins” - Daily Mail

'You're always guaranteed a corking characters and a fast-paced read with a Bagshawe story, and this doesn't disappoint' Heat -

‘the queen of chick-lit' Woman's Own -

”'a cut above the rest… Pure, unadulterated escapism.” - Fabulous