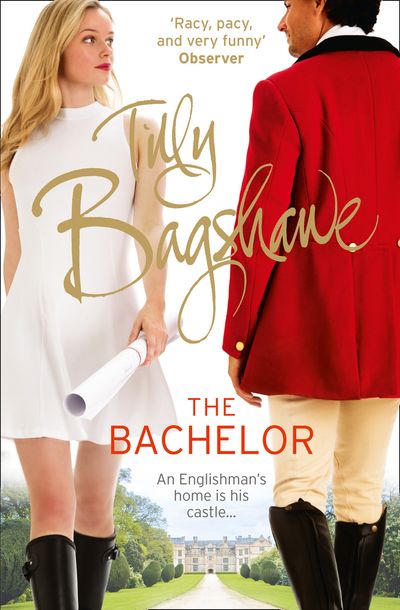 It is a truth universally acknowledged, that
a single man in possession of a good fortune
must be in want of… anything but a wife?

Henry Saxton-Brae has it all – a titled, self-made millionaire,
his fiancée just happens to be a supermodel who is as kind and loyal as she is ravishingly beautiful. To top it all, he’s just bought Hanborough Castle, the jewel in the crown of the Swell Valley.

Life couldn’t be better… for someone who was ready to settle
down. Could he really be the only man in the world not in love
with his future wife?

Flora Fitzwilliam has been summoned by legendary
designer Graydon James to restore Hanborough to its former
glory. She soon discovers that it’s not just the house that
needs fixing, and Flora seems to be the only person who sees
the real Henry Saxton-Brae.

Between her boss’s waning talents and Henry’s roving eye,
Flora is being torn apart. Can she pull off the job, and make
Henry see that his bachelor days are behind him?

Not since Rupert Campbell-Black has there been such a devastatingly sexy man in jodhpurs!

Author: Tilly Bagshawe
Format: Paperback
Release Date: 16/06/2016
Pages: 464
ISBN: 978-0-00-813281-1
Tilly Bagshawe is the internationally bestselling author of eight previous novels. A teenage single mother at 17, Tilly won a place at Cambridge University and took her baby daughter with her. She went on to enjoy a successful career in The City before becoming a writer. As a journalist, Tilly contributed regularly to the Sunday Times, Daily Mail and Evening Standard before following in the footsteps of her sister Louise and turning her hand to novels.Tilly's first book, Adored, was a smash hit on both sides of the Atlantic and she hasn't looked back since. Tilly and her family divide their time between their homes in Kensington and Los Angeles and their beach house on Nantucket Island.

It is a truth universally acknowledged, thata single man in possession of a good fortunemust be in want of… anything but a wife?